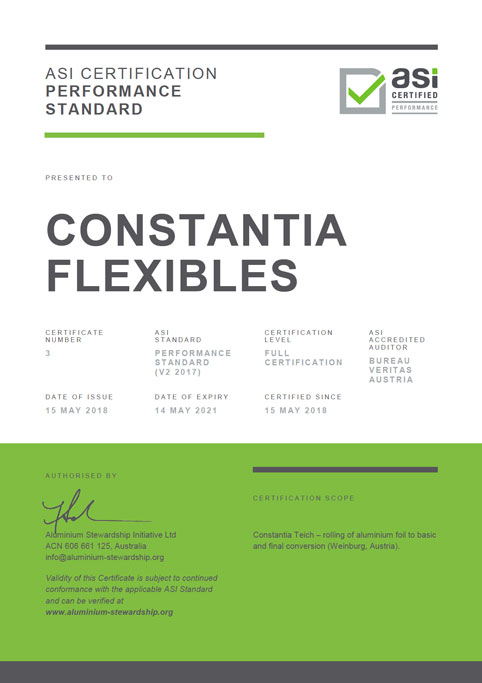 Aluminium Stewardship Initiative (ASI) today announced the third certification issued against its newly launched standards for responsible production, sourcing and stewardship of aluminium.  ASI Certification of the Constantia Teich facilityies signifies that Constantia Flexibles’their practices meet the industry’s highest standards.  Constantia Teich is the largest company within the European flexible packaging industry and in 2017, their team of 960 people produced 1.1 billion square metres of aluminium foils and 67,000 tonnes of packaging foils.  Constantia Flexibles is a founding member of ASI.

The ASI Certification program was developed through an extensive multi-stakeholder consultation process and is the only comprehensive voluntary sustainability standard initiative for the aluminium value chain.  The independent, third-party audit of Constantia Teich was carried out by Bureau Veritas Austria.

Fiona Solomon, Chief Executive Officer at ASI said “ASI warmly congratulates Constantia Teich on their important achievement of ASI Certification, still only 5 months after the launch of the ASI program.  Aluminium packaging is a critical sector for aluminium use, directly touching billions of consumers every day.  Every part of the supply chain has a role to play in rolling out ASI’s Standards, and it is a great pleasure to see Constantia Teich leading the aluminium foil rolling sector as the second company to attain ASI Certification.”

Thomas Greigeritsch, Vice President Group Sustainability at Constantia Flexibles, sees broad collaboration along the whole aluminium value chain as key to establishing a responsible sourcing scheme: “Our and ASI’s success depend on the support of all different players. This is essential to ensure the broad-based adoption and implementation for what we have developed. In 2010, we have started with a handful of people drafting first ideas for the development of anwhat has become the ASIAluminium Stewardship Initiative. Now, we are more thanextremely happy having reached our first goal andof being certified against the ASI Pperformance Sstandard. What’s more, we are striving to implement the Cchain of Ccustody certification in the near future. I would like to give a big thank you to all people involved and for the excellent work of the whole ASI team.

ASI’s Standards apply throughout the supply chain, from mining through to downstream sectors that use aluminium in their products.  All current ASI members in the ‘Production and Transformation’ and ‘Industrial Users’ classes will be working towards their own ASI certifications in the coming two years.  ASI Members are listed at https://aluminium-stewardship.org/about-asi/current-members/

ASI’s custom-built online assurance platform, elementAl underpins the entire certification workflow for both the ASI Performance Standard and Chain of Custody Standard. First, elementAl’s user-oriented interface and workflows support the prospective company during the initial self-assessment phase and data is protected by a secure firewall. With a click, the company can make their relevant elementAl information accessible to their chosen auditor.

Auditors use elementAl to support audit planning, on-site verification and reporting.  ASI reviews submitted audit reports for conformity with ASI’s assurance procedures as a final control, before the certification approval and certificate(s) are issued. Full ASI certification is valid for three years, usually with a surveillance audit at approximately 18 months.

About ASI
The Aluminium Stewardship Initiative (ASI) is a global, multi-stakeholder, non-profit standards setting and certification organisation. It works toward responsible production, sourcing and stewardship of aluminium following an entire value chain approach. To this end, ASI launched its Performance Standard and Chain of Custody Standard in December 2017.

ASI’s 60+ members include leading civil society organisations, companies with activities in bauxite mining, alumina refining, aluminium smelting, semi-fabrication, product and component manufacturing, as well as consumer and commercial goods, including the automotive industry, construction and packaging, as well as industry associations and other supporters.